Tuesday: So far no rain for two days and a full day of sun today. Things are starting to dry out. You know each year about this time I whine about too much rain, and then sometimes, like today, I look around and realize that if this is a typical spring in 6 weeks I will be begging for rain. April has been host to some nasty droughts in the past and is almost always a very dry month. I picked up eight Dwarf Burford Hollies today to finish the arch at the top of the cross bed. Other than the normal spur of the moment can't live without plants purchases, this is it for the spring. I quite a few plant moves left to do, but nothing serious except for the Azalea. I am in a quandary because it is very late to attempt the move, but they are doing so poorly where they are I fear they will not survive till next year.

Here is a new site, http://www.zydecoirises.com/ which comes to me by way of website feedback from Patrick over in New Orleans (Metairie). Check it out. It is a pretty neat site.

Saturday: Worked late every night this week. I am stuck with having to be satisfied with occasional peaks at the garden shows on HGTV while doing household chores this morning. Maybe I'll make it to the gardens later in the day, and it is a gorgeous one too. I did get the arch bed finished. The race is on with the Coco grass. It is sprouting everywhere and as near as I can tell growing about a half inch a day. Why do weeds do that and not ornamental plants. Oh well, if they did someone would label them as invasive and try to ban them. Although we do have a few invasive plants like the Chinese Tallow whose problem is quite obvious, many labeled as invasive seem to get getting an unearned reputation. OK, back to HGTV, first it should be called HHHHHHHGTV to reflect the pitiful ratio of gardening shows to other. And this year the lineup is as pitiful as I can ever recall. At least Paul James is still on. He is a good host, but even he needs to find some new material, not that I am complaining, due to the lack of other choices. I miss Gardener's Jounal, and Garden Diary. I found them both quite inspirational.

I also took advantage of this morning in to add some new features to the site. First is a new feedback form that does not require you to use email Hopefully this will inspire folks to give me more feedback. It does help with the motivation. I also added a this week in pictures section to the this week in the journal.

It is late afternoon on Saturday. Yes, I made it to New Dawn and the pond is in, yes that's right, the pond is in, all 900 gallons of it. I even got a few inches of water in it. Everything hurts, I had to dig the last few inches and another 2 inches all around while standing in several inches of thick clay mud. I shoveled as much water as clay. I broke off the water faucet, got the mower stuck, and did all kinds of fun things today, but the pond is in. Yahoo!

Sunday: I saw the first of the Redbuds starting to bloom today and the Flowering Quince is at its peak. This week will be fairly warm, but with another drop to near 40 during one of the week nights. Most plants are kind of just sitting there ready to bust out but waiting just a bit longer. We have another two weeks before we are pretty much completely safe from frost. Until then there is so much to do it is mind boggling. I need a month off every spring. It will get better each year. I built some new beds this year for the first time in 2 years. Last year I took some down and redesigned others for lower maintenance. Mowing the orchard area is much better. Now, if I could just get some Roundup down before we weeds get the upper hand. The battle will be won or lost in the next 2 weeks.

Almost forgot - The Banana Shrub (Michelia figo) started opening blooms with that wonderful smell. This is its first season to bloom 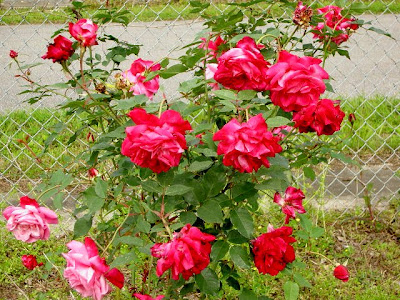 Mr. Calvin J. Picard, mentioned in the Journals many times, was my old neighbor who moved away last year. A gifted gardeners who was always a joy to talk with and a free giver of plants like my Mulberry, Celeste Fig, crinums, Champanelle grapes, bananas, and others, passed away this week. This unidentified heirloom rose came from his gardens and put on quite a show this week. I am sure it was in his honor. Calvin, we'll miss you. 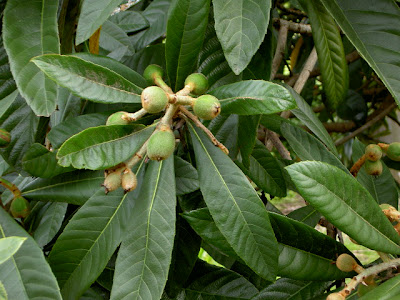 The fruit crop is developing nicely on this large Loquat, known locally by the old timers as a Japan Plum.. I have 3 seedlings of this tree planted at New Dawn and 3 more in pots. This one is in the backyard. The largest planted seedling might be ready to start setting fruit as early as next year. 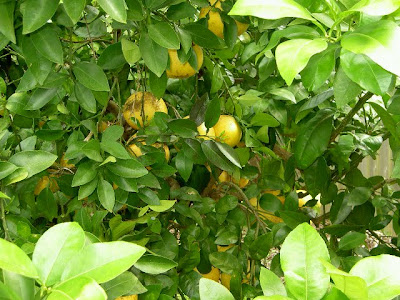 As you can see we still have many Grapefruit on the tree. I should probably pick them all as the citrus will begin to flower in the next 30 days. I would guess this tree will have a small crop in 2005 after the bumper crop of 2004. 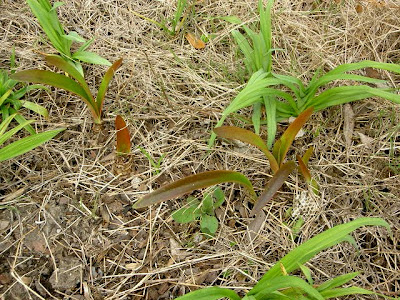 The Amaryllis are starting to show well as are the Daylilies. I moved the winter before, so last year they did OK, but I have high hopes for this year. 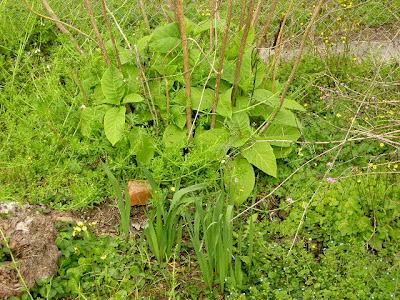 Arising from the dead stalk of last year, the Angel's Trumpets are well on their way to recovery. Note the Gladiolus Byzantinus in the foreground as well. These old heirloom glads naturalize readily here in the Gulf South. 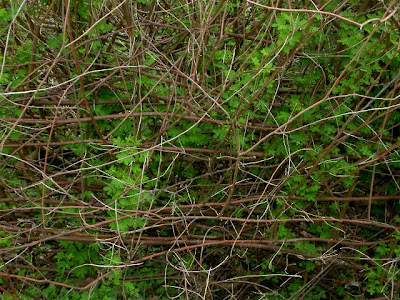 This thicket of branches going every direction is our Cassia. Brought here 3 years ago as two small twigs, it is now a thicket about 12x12x12 feet. It will be a sea of green very soon as you can see it has already begun its spring green up. That will be followed by a sea of yellow in the fall at bloom time. Birds love it all year long. 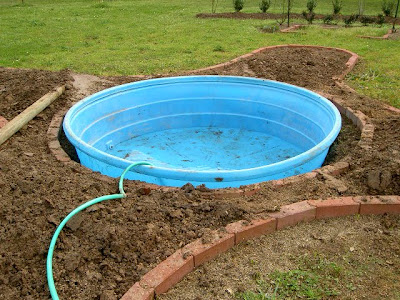 Here you go, 900 gallons of water on the way to delivery. Still kind of hard to see the final picture of what this will look like but the hard part is over, I guess. Lots of tilling, adding organic matter. planting. Oh, and I have to add stone around the pond edge to soften the edges you see here...Oh, and I have to assemble the fountain, drill the main base. What was that I was saying about the hard part being done?
Posted by Keiththibodeaux@gmail.com at 10:57 PM No comments: