Breakfast fresh off of the vine. Only a couple left out there, then its bye bye Canteloupe till spring. 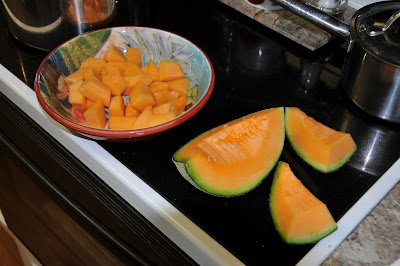 Posted by Keiththibodeaux@gmail.com at 10:03 AM No comments:

Tomatoes are Falling, No Wait They're Not Falling, But It Is Fall Tomato Time

Almost forgot to mention, its fall tomato time.  I havested 3 yesterday and 2 today.  Haven't had any for months, so I can't wait to see if they have that awesome taste of spring tomatoes.   Maybe a tomato and egg sandwich for breakfast tomorrow morning?
Posted by Keiththibodeaux@gmail.com at 11:15 PM No comments:

It was a busy day in the garden today.  I pulled out the last of the Sun Jewel Melons and Yellow Crookneck Squash.  I then tilled and rehilled those areas, some unplanted areas, and some areas where I was trying old seeds.  In all it was probably around 150 of row that was reworked and planted.  On the carrot side I put down Carrot Nantes Coreless, Chateney, Danvers, and Imperator.   On the beet side, I planted Detroit Dark Red, Detroit Red, and Early Wonder.  I also planted some Red Creole Onion seed.  First time I have tried onions from seed.  I planted about 20 Onion sets also, some yellow, and a few reds that I found in the wheelbarrow from last year.  Last, and most certainly least, I planted some radish from that old 2003 seedlot named 'Easter Egg II Blend.'

So, now I am tired and my back hurts, but it hurts good.

Oh, I left the Mexican Melon and Canteloupe.  Yeah, there pretty much done, but there is so much fruit left on the vines, I have to give them just a little longer.  I am not sure I could have gone any longer, anyway.
Posted by Keiththibodeaux@gmail.com at 7:18 PM No comments:

Had a little simple country fun just now. I was just cleaning up in the garden, so everytime I found a melon that was a little over ripe, bugs in it even better, I threw it straight up in the air high as I could, watched it come down and explode, then watched the chickens come a running to devour.

Judging by the remains, I think the chickens really liked this Mexican Melon. 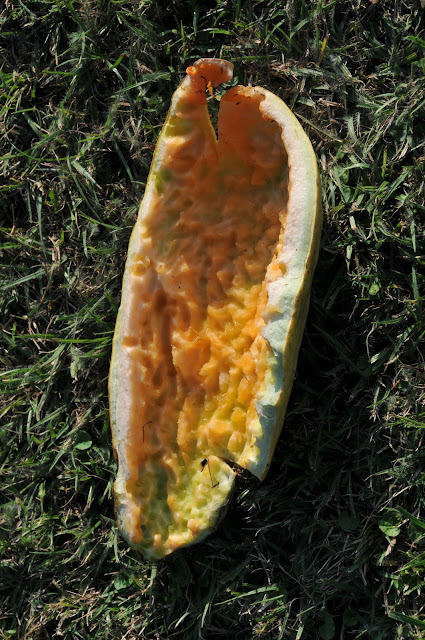 Posted by Keiththibodeaux@gmail.com at 5:02 PM No comments:

Actually something is bugging my garden.   First came the moths, then came the little green worms who are devouring everything in sight.  They started with the melons, the Cucumber, Mexican Mellon, and Sun Jewel Melon, and that was OK, cause they were about done anyway.  Then they headed to the Yellow Crookneck Squash, skelotonizing every leaf in sight.  And that was OK, too, cause I was about done with them.  And that was all in the space of a couple of weeks.  But now they must be stopped before they set their sights on the Cabbage, Mustard Greens, Kale, etc.  Fortunately a cool front arrives tonight which should slow them down.  Next, I'll move in with an organic insecticide, like BT, to finish them off.  One thing for sure is you can't take your eyes off of a southern garden for long, or the insects will pick it up and carry it away.  Kind of reminds my of a Borg episode on Star Trek.
Posted by Keiththibodeaux@gmail.com at 12:13 AM No comments:

Whole Lot of Shaking, Err, I Mean Harvesting Going On.

Been waiting for the recently planted seeds to come up, and for the moon to say its time to plant the root crops.  In the meantime, we have harvested so much we have run out of freezer space.   We have room for an upright freezer in the utility room, so its decision time.

I am getting ready for spring as well.  I used a gift certificate from Cel, to get 10 bags of chicken poop and other supplies, which are all stored away for winter. The two large compost bins are full and set to slow cook over the winter. Seeds are purchased and in storage. The only thing left for spring and summer crops is a good back. And after the cold of winter, that hard work and sweat in the sunshine of spring will hurt so good.
Posted by Keiththibodeaux@gmail.com at 11:11 PM No comments: 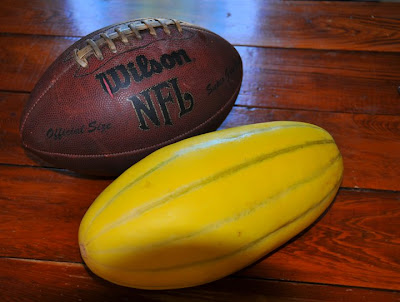 And Sun Jewel Melons?   Well, I bought this cool melon from Gotreaux Family Farms in the late spring.   It was pretty cool so I saved the seeds, which I then planted this fall.  And I've got a ton of them, so this one definitely qualifies as botha  spring and a fall crop.
Posted by Keiththibodeaux@gmail.com at 11:48 PM No comments:

Kuato Says To Open Your Mind

The garden can be a little sci-fi'ish every once in a while.   Check out this wild pair. 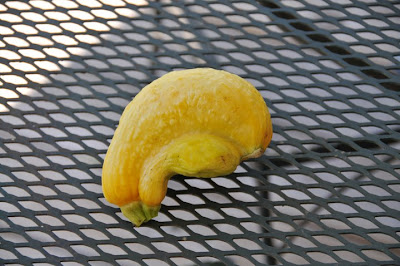 Posted by Keiththibodeaux@gmail.com at 11:31 AM No comments:

Putting up squash tonight. Vacuum sealing the old fashioned way, with a straw zipped into the corner of the ziplock bag, inhale, squeeze the straw closed, remove and finish the zip in one smooth motion.  Flatten and freeze.
Posted by Keiththibodeaux@gmail.com at 4:59 PM No comments:

Moon Says to Plant, Who Am I To Argue.

First Quarter Moon - Plant above ground crops over the next 3 days, 14th to 16th, but be done by Saturday eve, no planting on Sunday. Here in Louisiana that includes Spinach, Broccoli, Cauliflower, Kale, Kohlrabi, Mustards, Brussel Sprouts, Lettuce. And maybe Swiss Chard. Who knows why Swiss Chard is maybe?


So, today I finished off the last 15 feet of Row 1 by seeding with Tall Utah Celery and Bright Lights Swiss Chard.

I planted Row 5 with Souther Curled Mustard, Even' Star Champion Collards, Red Russian Kale, and Long Island Brussel Sprouts, in that order from rear to front.
Posted by Keiththibodeaux@gmail.com at 3:14 PM No comments:

Rains Said Yes, and Now, So Does the Moon

We had a really good rain yesterday in advance of cooler weather.  Its still quite warm out there, but not the record heat of last week.  And the rains were just in time as growth was starting to slow down.  Now things are back in high gear, although I am already tired of eating Cucumbers and by the numbers of Yellow Crookneck Squash out there, that will be the next thing to overwhelm my diet.  But at least the squash are easy to "put up."

And about the moon.  I am paying more attention to planting by the moon this year.  Not that I am all that convinced of the science of it, at least not yet, but I have to say its fun.  And what's the harm anyway.  Who knows, maybe it works.  So, we are tomorrow is 1st quarter.   Got the next 3 days to plant above ground crops.
Posted by Keiththibodeaux@gmail.com at 11:42 PM No comments:

Fall Harvest is Kicking Off 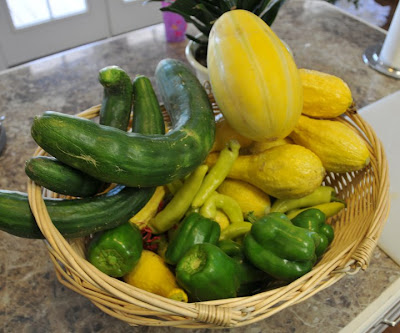 Its a good fall harvest this year.  The weather is cooperating nicely and the bugs are being gentle.  Here is a picture of today's harvest.
Posted by Keiththibodeaux@gmail.com at 11:30 PM No comments:

Harvested some Limes today. Due to the freeze damage resulting from last year's 15 year record lows, the citrus harvest will be a fraction of what we got last year.  We'll have enough to enjoy through the fall, but it won't be like last year when I am sick of eating Citrus while the trees are still full in late winter.
Posted by Keiththibodeaux@gmail.com at 10:58 PM No comments:

Canes and Canes This Week

The Hurricane Lilies popped up out of nowhere over the last week.  I'll add a picture this weekend.

And also this week marks the beginning of Sugar Cane harvest, with cane trucks having popped out of nowhere as well.  Time for extra safe driving as we deal with slow moving tractor to barreling 18-wheelers hauling cane from here to there, and everywhere in between. 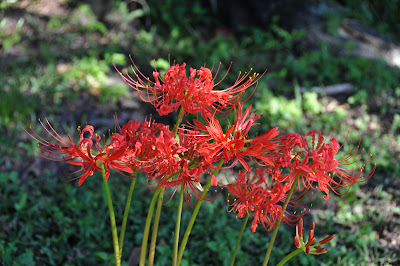 Posted by Keiththibodeaux@gmail.com at 3:34 PM No comments: